Sorry, this product is no longer in stock.

Sorry, this product is no longer in stock. 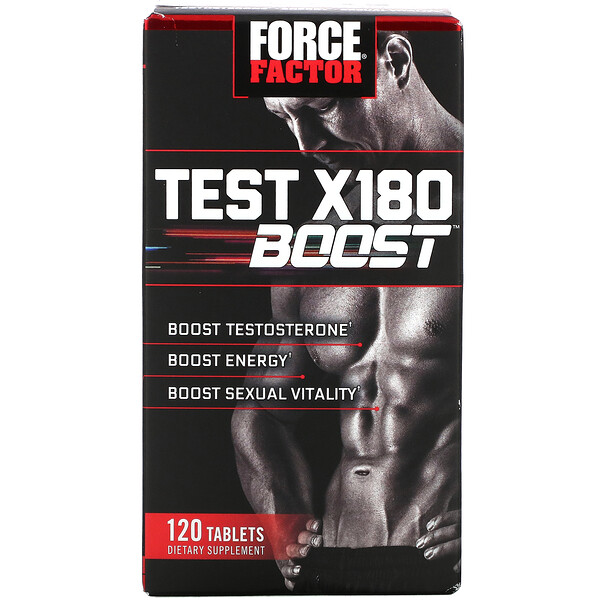 The Boost You Will Feel!

Test X180 Boost was engineered by the experts at Force Factor® to provide the boost that every man wants. By helping to boost your energy and testosterone, Test X180 Boost improves workout performance to help you look your best and feel more desire in the bedroom. Test X180 Boost gives you that boost you need to perform at your peak potential.

Test X180 Boost also contains testosterone-supporting minerals like boron, zinc, and magnesium, as well as vitamins D, B12, and B6, giving your body exactly what it needs for both work and play.

Also included is the proprietary Unreal Energy™ Matrix that features Infinergy™ and Extended Release zümXR® for an ongoing energy boost throughout the day.

D-Aspartic acid is an amino acid that functions in the body to help produce and release hormones. It has been shown to help boost testosterone.

Many people are deficient in Vitamin D and it is needed for optimal testosterone production, so don't be deficient!

Fenugreek has been used traditionally to boost sexual function, libido, and testosterone levels.

Tribulus terrestris has been traditionally used for male health, virility, and vitality.

Boron, zinc, and magnesium are minerals used for building strong bones and as an aid to help build muscles and boost testosterone levels.

A premium form of maca, black maca has been traditionally used to help increase libido and as a stamina builder.

Featuring a triplex of caffeine, Infinergy™, and Extended Release zümXR® to help give you a lasting energy boost throughout the day.

Keep out of reach of children. For adult use only.

Use only as directed. Consult a healthcare professional before use if you are pregnant or nursing, have a medical condition, or use prescription medications. Store in a cool, dry place. Protect from heat, light, and moisture.

The recommended dose of this product contains about as much caffeine as one and a half cups of coffee. Limit the use of caffeine-containing medications, foods, or beverages while taking this product, because too much caffeine may cause nervousness, irritability, sleeplessness, and, occasionally, rapid heartbeat.