By Solgar
33 Reviews | Write a review 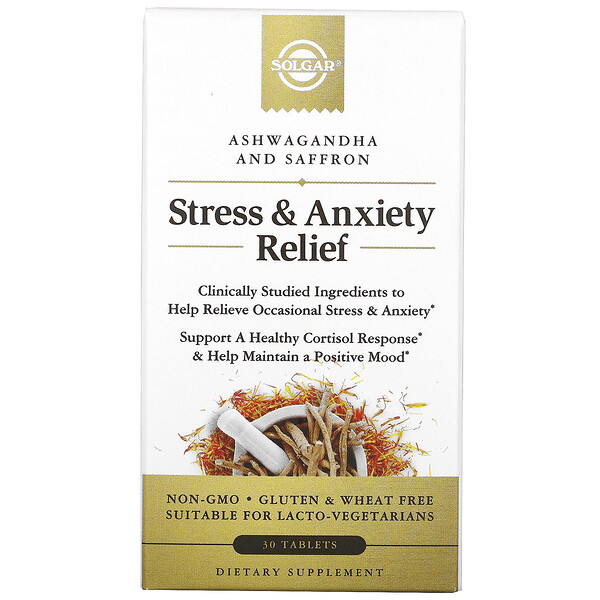 Stress... it's a part of everyday life. No matter the cause, there's a good chance you've experience some of its symptoms at some point including occasional anxiety, fatigue, and more. Maybe the worst part about stress is they way that it makes an impact on your daily life. It's hard to focus on your family, your job and, for that matter, just about anything else when you're struggling with the symptoms of occasional stress.

Wouldn't it be great if there was a way to provide herbal-based stress relief in your life? Now, there is with Solgar® Stress and Anxiety Relief - a combination of two plant-based ingredients KSM-66® Ashwagandha and affron® Saffron that have been clinically studied to help your body better manage the disruptive symptoms of occasional emotional stress.Ashwagandha & Saffron: Deeply Rooted in Traditional Ayurvedic Customs

Ayurveda, a holistic system with historical roots in Indian Culture for over 5,000 years, has today been accepted as an alternative form of self-care. Ayurvedic practices have been traditionally integrated into daily routines to help promote general health and wellness.

Ashwagandha is one of Ayurveda's most important Rasayana herbs. Because of its well-known benefits, it was also later described as an Adaptogen that helps your body adapt to stress and restore its natural balance. It has been clinically studied for its beneficial effects on general well-being.

Saffron, a potent spice, has also long been used in Ayurveda for its mood-stimulating properties and has been clinically studied for supporting emotional well-being and a positive outlook.†

†Based on one double blind placebo controlled study in adults.

As a dietary supplement for adults, take one (1) tablet daily, preferably with a meal or as directed by a healthcare practitioner.

Not intended for use by pregnant or nursing women. If you are taking any medications or have any medical condition, please consult your healthcare practitioner before taking any dietary supplement. Discontinue use and consult your healthcare practitioner if any adverse reactions occur. Not intended for use by persons under the age of 18. Keep out of reach of children. Store at room temperature. Do not use if outer bottle seal is missing or damaged.